This summer has been big for huge website launches, such as Google+ and Spotify. With these launches, we’re seeing a growing trend: access by invitation only. But is it successful? We think so. This might just be the smartest marketing move either of these companies could make.

Jen Deguay from Compete Pulse compares invitations to this summer’s hottest websites to invitations to parties, and really puts things into perspective. You can read the article here. Deguay concludes that Spotify is throwing the best party on the block, and we agree.

Spotify is offering a compromise. It built up enough tension and excitement in America as we just waited for it to launch. Previous to this summer, the music streaming service was only available in Europe, but was highly coveted overseas. Once it announced it was extending, buzz began. After launching the beta version, Spotify stuck with the invitation only access option, but decided to give special attention to its “VIP” members. If you wanted to use the free version, you had to put your name on the list and wait patiently for that golden ticket. But, if you are willing to shell out a cover of $4.99 a month for the Unlimited version or $9.99 a month for the Premium, you can skip the line, duck under the red rope and dive right in.

Just because Google+ isn’t offering any way to cut the wait time doesn’t mean their plan isn’t working, though. They chose to only allow people by invitation to test their beta version so they could get feedback and make it the best it could be before going public. By allowing users 15 invitations to use as they saw fit, they ensured that users could have at least a few friends to circle, while still keeping the test pool moderately sized. The graph below shows how quickly Google+ reached 10 million users compared to its biggest competitors, social media powerhouses Facebook and Twitter. 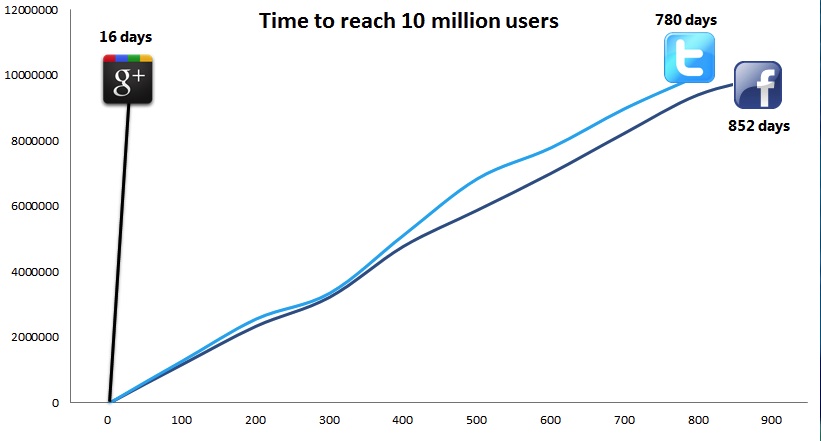 There’s just something about exclusivity.